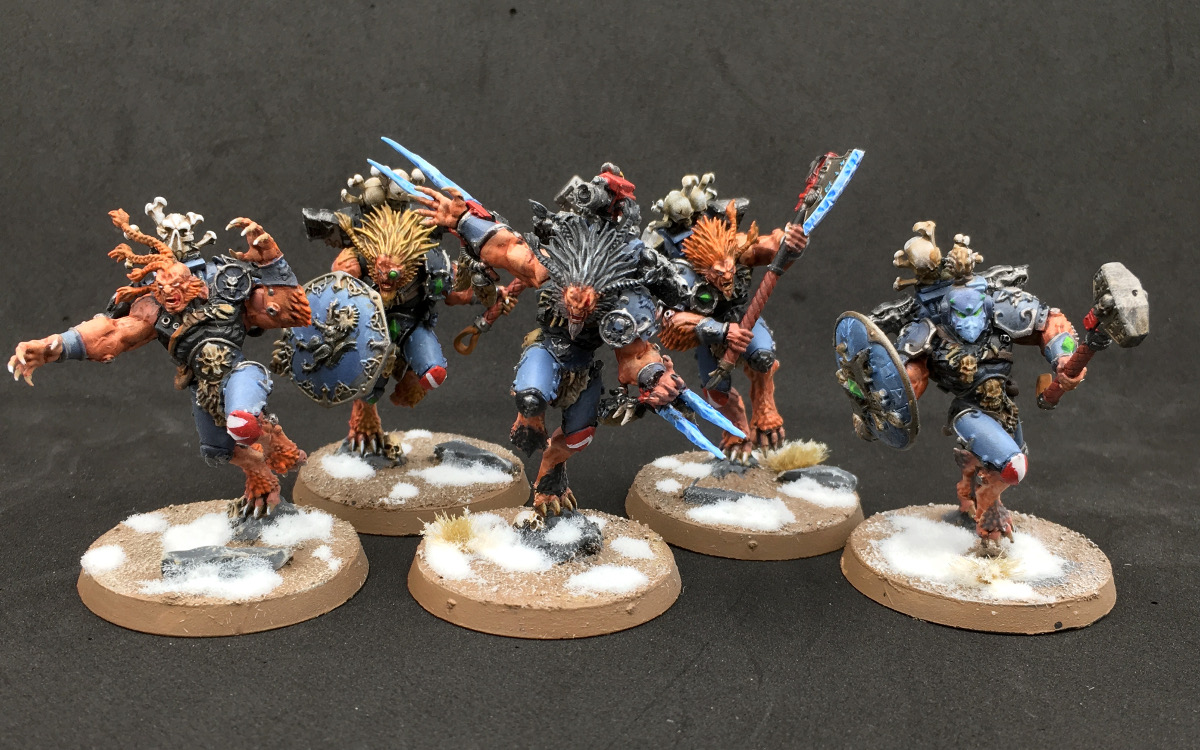 As noted, I am working on a Chaos project for the new, 8th Edition of Warhammer 40K. Nonetheless, there is still stuff from my current (and still main) 40K army on my table, including these lovely Wulfen I managed to finish. END_OF_DOCUMENT_TOKEN_TO_BE_REPLACED 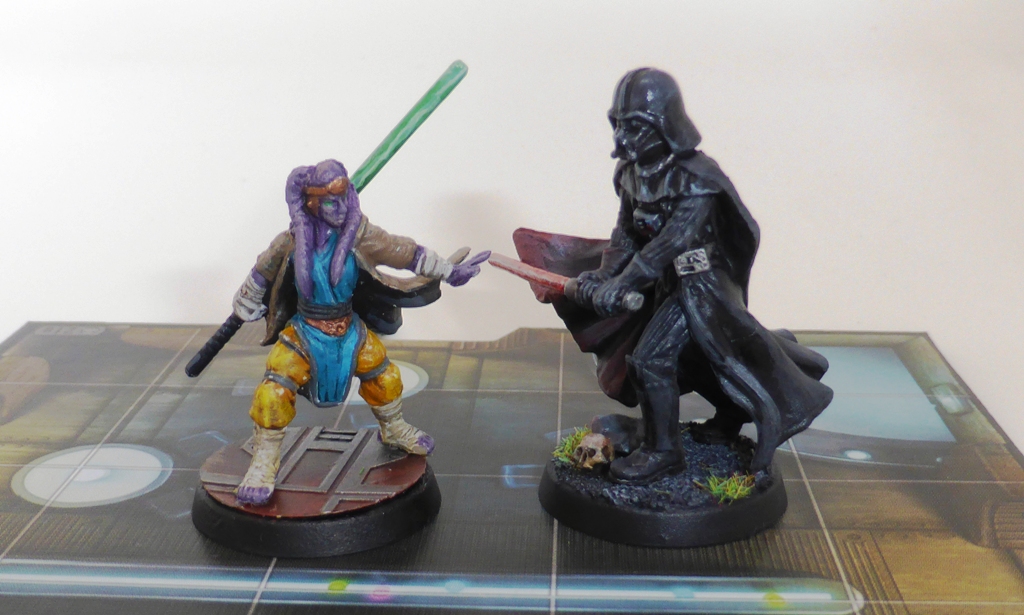 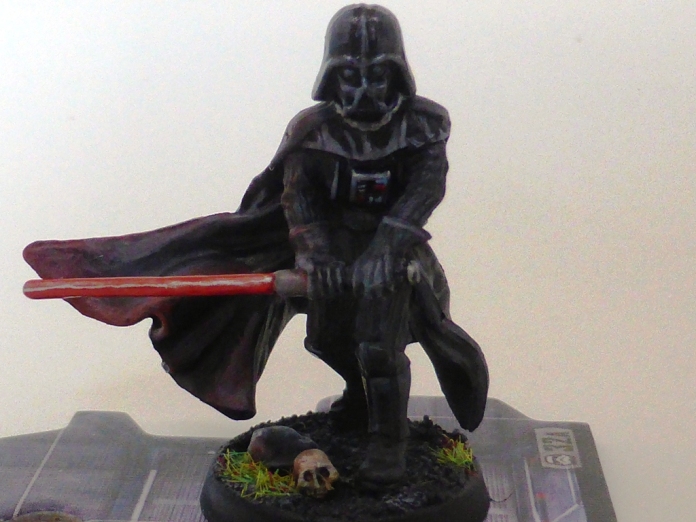 Final steps on my Darth Vader miniature included a coat of Citadel Purity Seal, followed by re-application of glossy ‚Ard Coat, notably on the light saber.

I also rebased Darth Vader, adding a little grimdark skull to go with it (if anyone deserves a skull to his feet, it is Darth Vader). 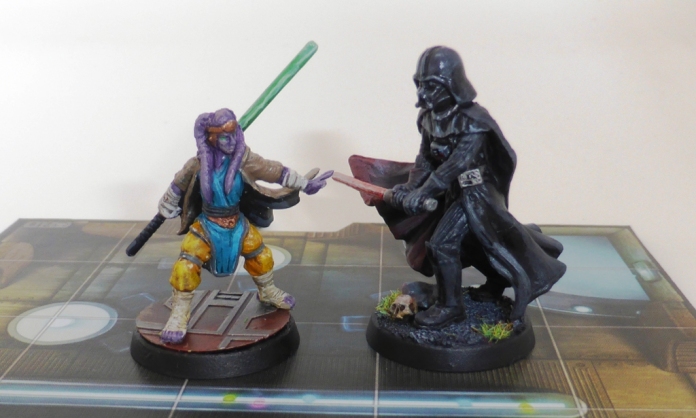 If you missed my earlier articles on painting Darth Vader, you can find them here: 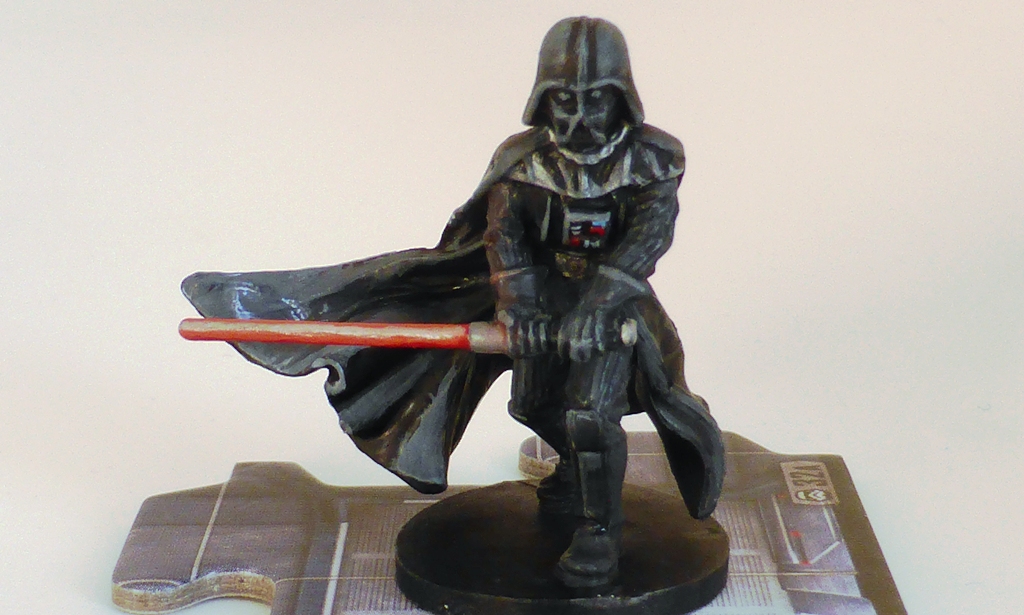 The next step in painting my Imperial Assault Darth Vader was the light saber. 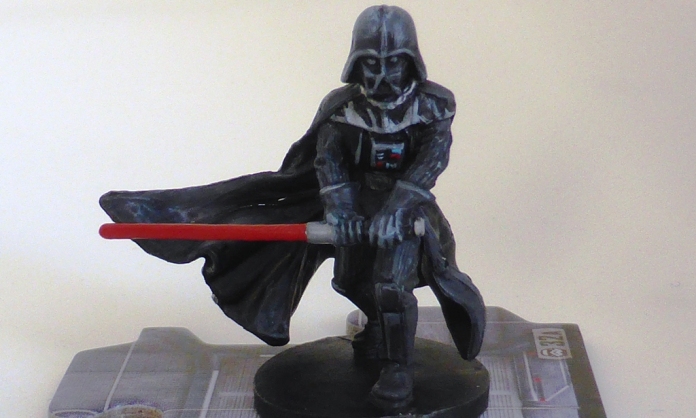 I started with two layers of red over the white base coat of the light saber blade. The first layer in Mephiston Red, the second layer in Evil Sunz Scarlet. 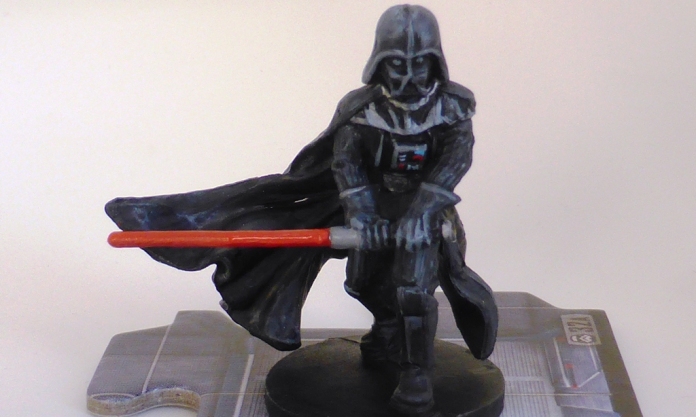 Once I had a nice red, I started adding a lighter highlight to the upper and front part of the blade with Wild Rider Red. 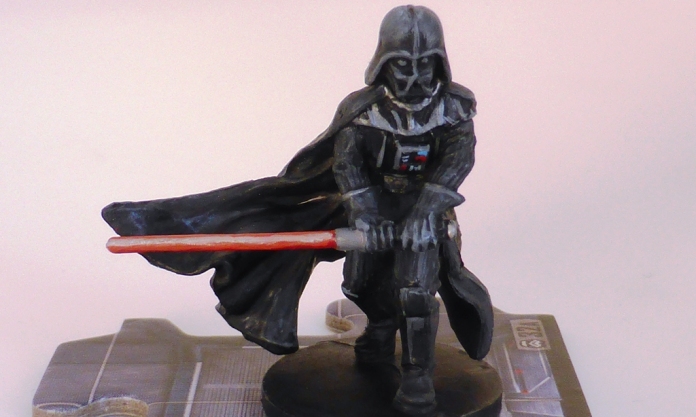 Another suggestion, which I picked up from YouTube, was to attempt the light saber’s glow effect of the light saber with a line of Rune Fang Steel, a very bright silver, and not a bright red or white.

One Step Back – Highlights on the Cloak 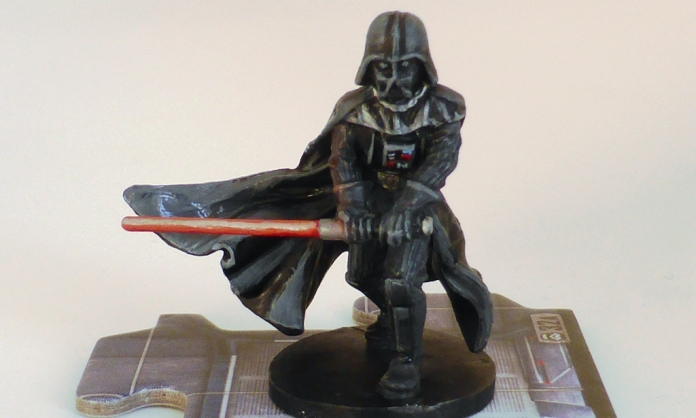 I also started adding a red glaze – Citadel’s Bloodletter – to the areas surrounding the light saber, to simulate the glow effect.

The red glazed did show on some areas, notably the glove and arm, but wouldn’t take to the cloak right next to the light saber, which was still to dark.

To help with this, I went back and added more highlights with a mix of black and Fenrisian Grey to the cloak around the light saber to create a basis for the glaze. 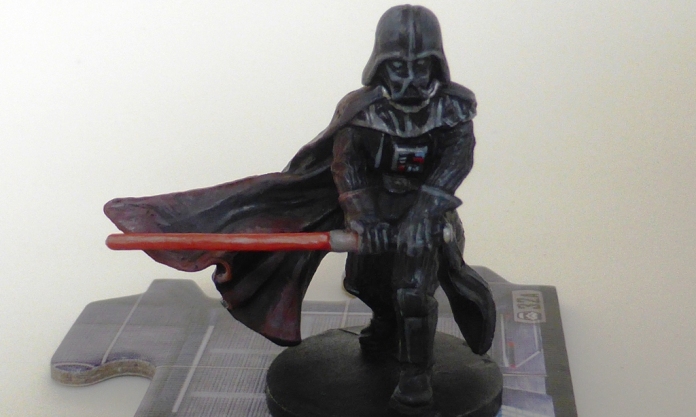 After applying the new highlight to the cloak, I went back and applied several layers of Bloodletter for a red effect on the right side of the miniature.

I also toned down the silver line on the light saber itself. 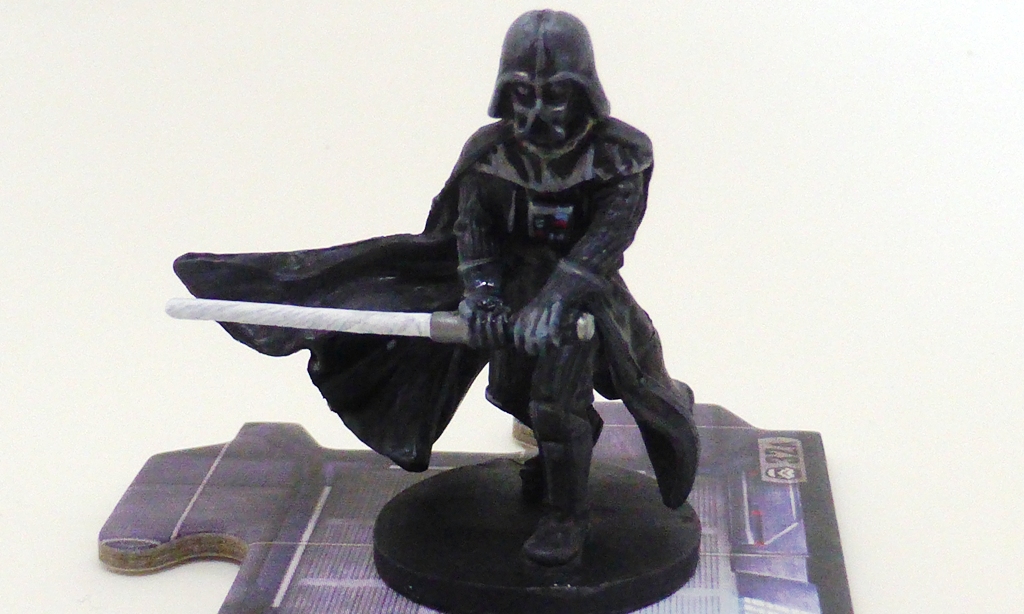 I chose Darth Vader as my next project. As I have basically no experience painting black details, I once more turned to Sorastro’s Painting Tutorials for inspiration. 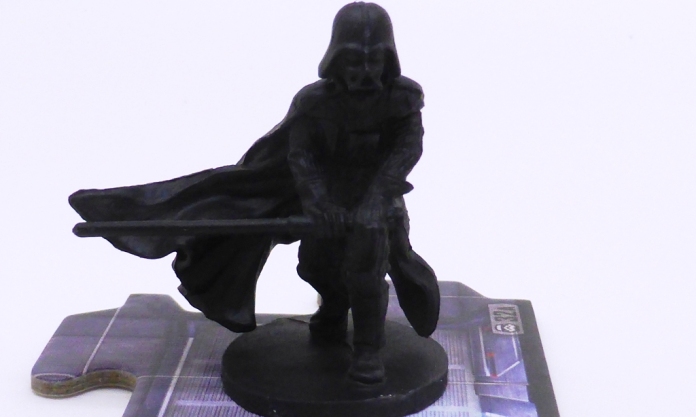 No more than giving the miniature a good coat with Citadel’s black primer. 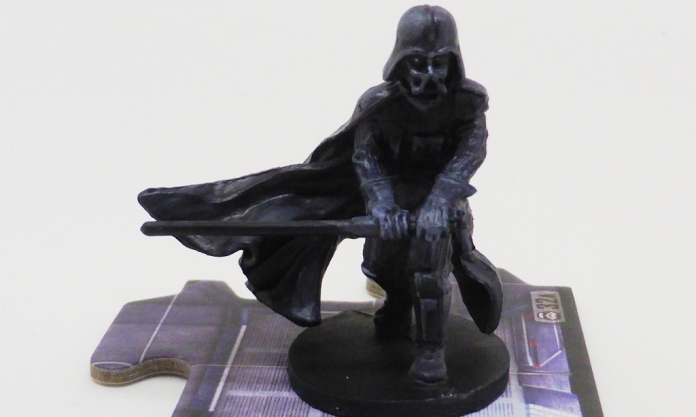 Highlighting Darth Vader is where the fun starts. I used a mix of Army Painter Matt Black and Citadel Fenrisian Grey, adding more and more Fenrisian Grey as I went to brighten the highlights (or some more black, when I found the contrast too stark). 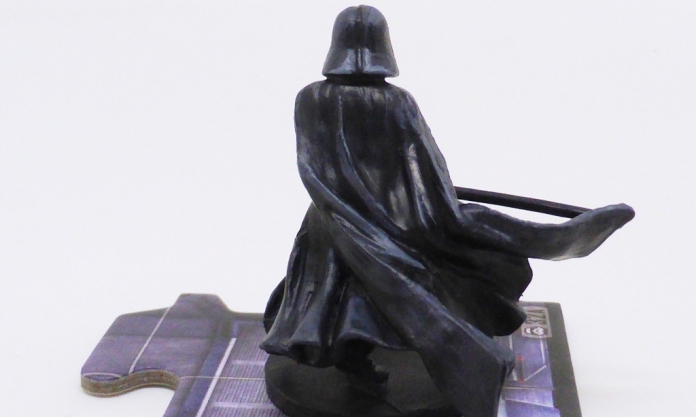 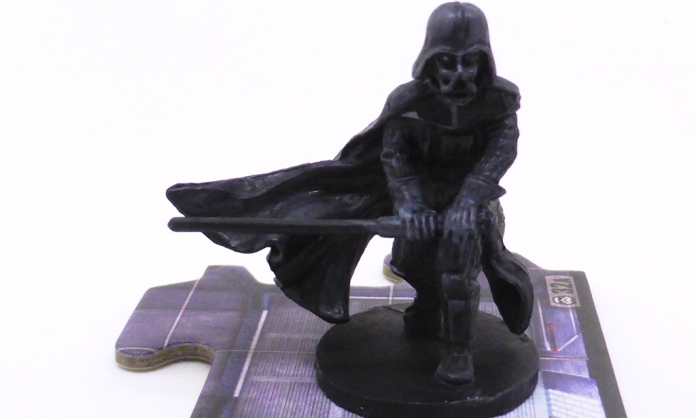 Once I was happy with the highlights, I let the miniature dry, before giving it a wash with Citadel Nuln Oil. 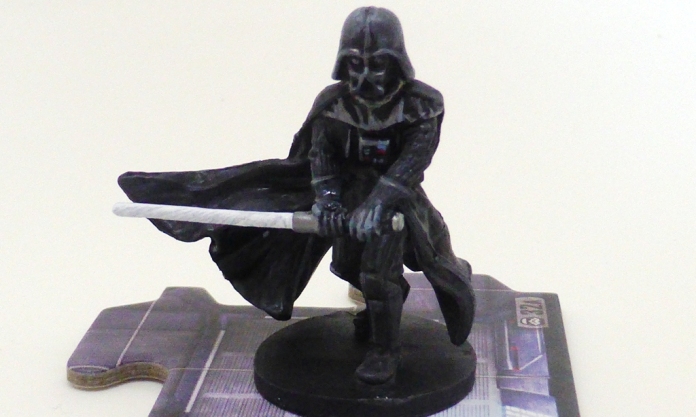 Finally, once the wash had dried, I went back to some of the highlights, this time adding a bit of silver metallic paint into the aforementioned mix. I also used the metallic paint for the belt, the light-saber handle and the chain holding the cloak.

I painted the red (Mephiston Red) and blue (Lotheran Blue) buttons on the chest panel.

Last but not least, I gave the blade of the light saber a coat of Ceramite White in preparation of painting it in a vibrant red. 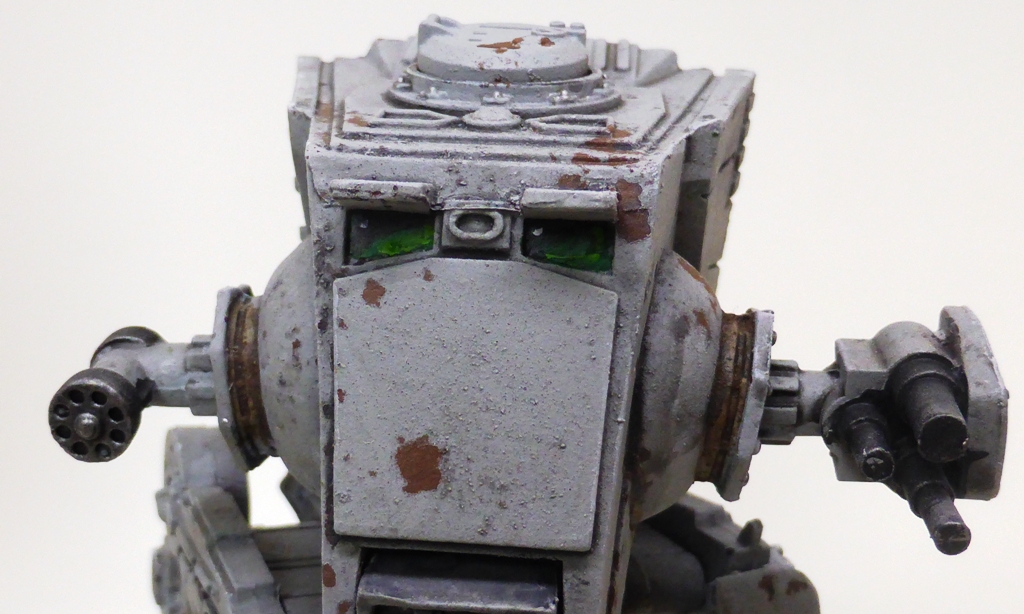 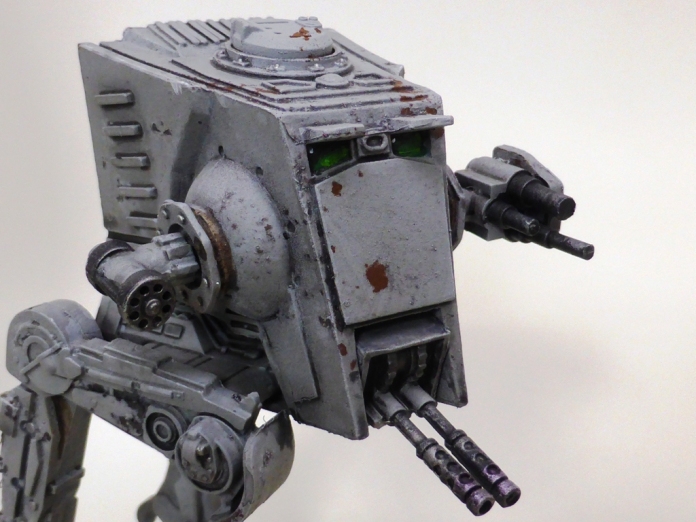 After the initial salt weathering on the AT-ST, I went to work on the details. 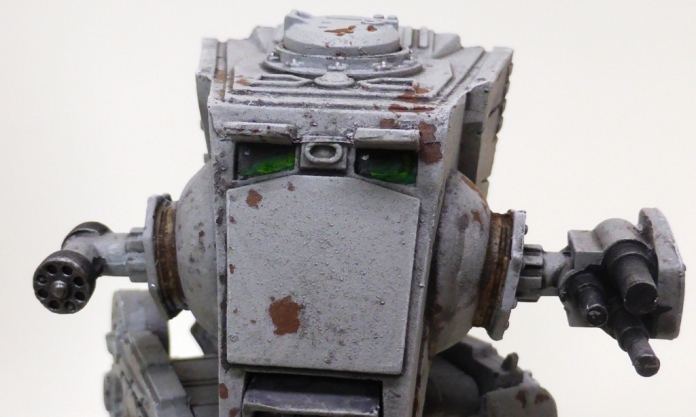 Close-up of the AT-ST cockpit

Another thing I wanted to add to the AT-ST was a magnet to the hatch, so I could swap it out for an old Games Workshop Tank Commander, who would serve as arch-villain General Weiss in my Imperial Assault campaign. 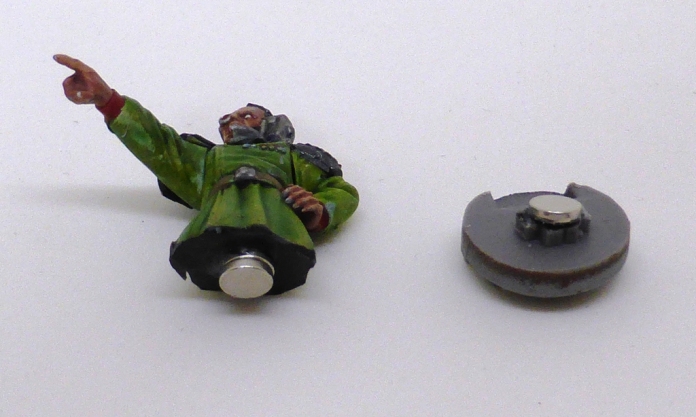 For this, I simply filed down the peg of the hatch-bit, so I could use a 2mm magnet and still have the hatch close.

I added a similar magnet to a Tank Commander and glued a counter-part magnet into the hole on top of the AT-ST, normally used to plug in the hatch. 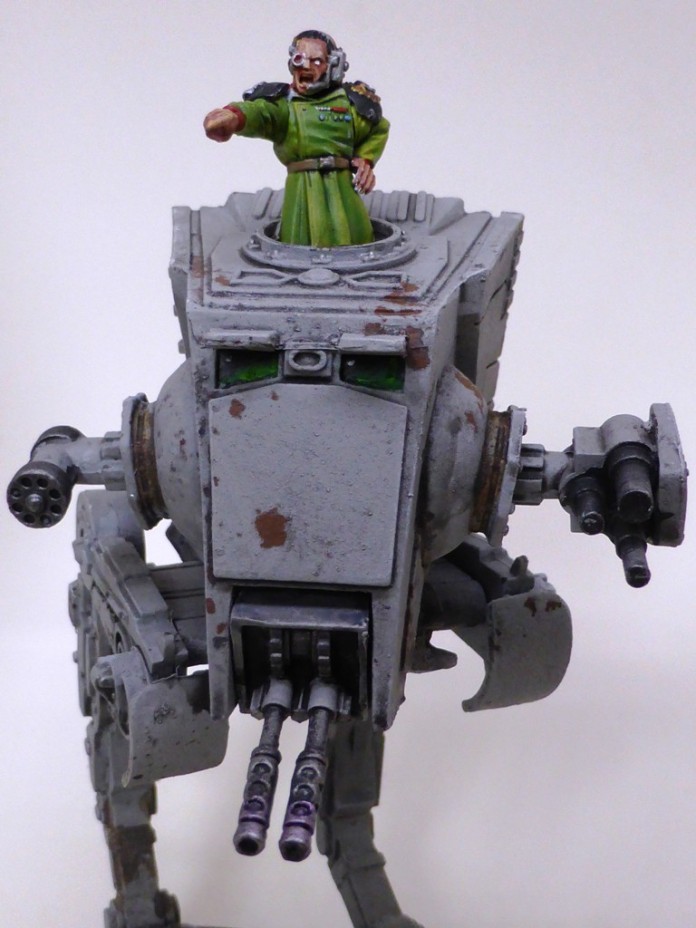 There is obviously still some clean-up to do, not to mention the base. However, I am very happy how my AT-ST is turning out so far … 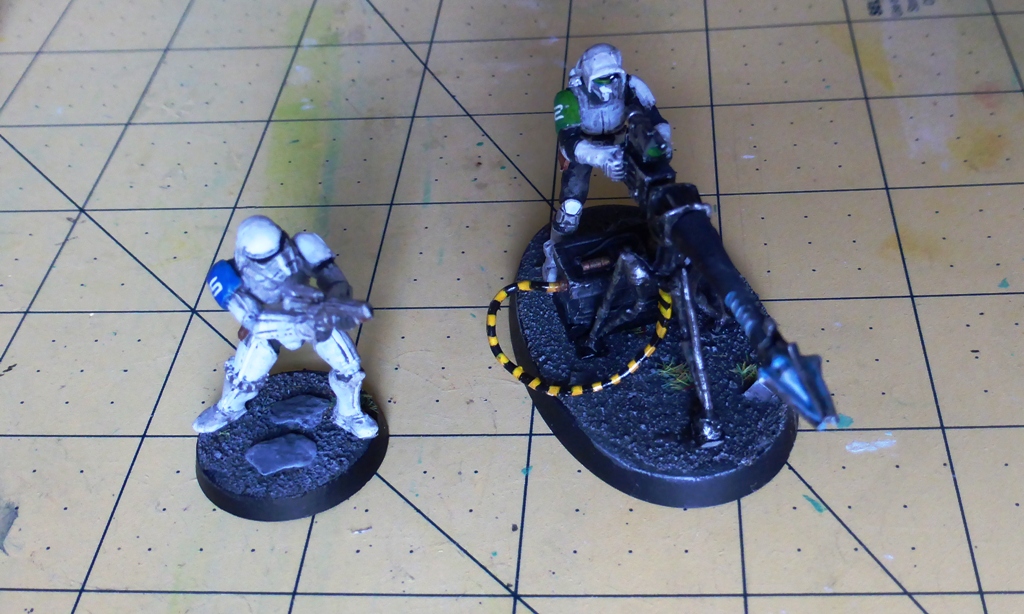 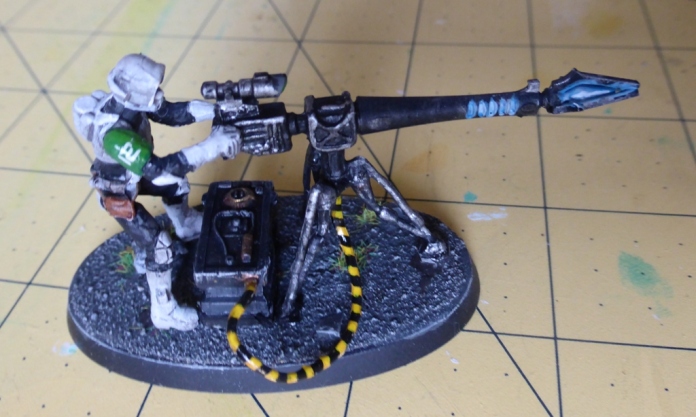 I am making some progress with painting up my box of Imperial Assault. While some of the miniatures, like the Nexu, are wonderful, others are less thrilling.

One miniature I found a bit disappointing was the Stormtrooper E-Web Engineer. The soft plastic used by Fantasy Flight Games seems less suitable to long, sharp forms such as weapon barrels as it is for organic forms like the Nexu. 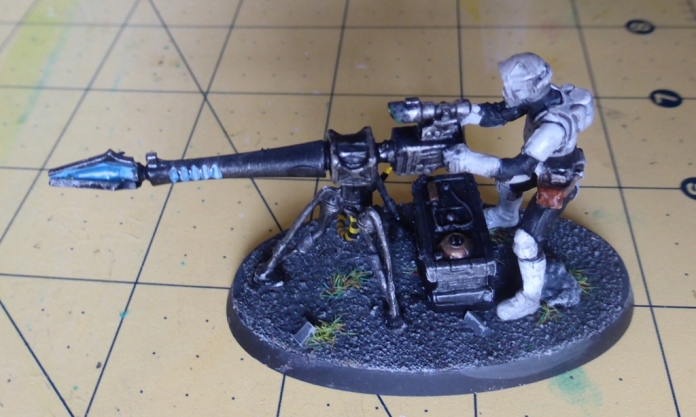 The E-Web Engineer’s barrel was particularly wobbly and not at all intimidating.

To get arround this, I dug into my Games Workshop bits-box and retrieved some Eldar guns. Though 40K weapons are mostly too large for Imperial Assault conversions, the slender Eldar-stuff just about works.

So I swapped the barrels of the Engineer with some Eldar-guns. 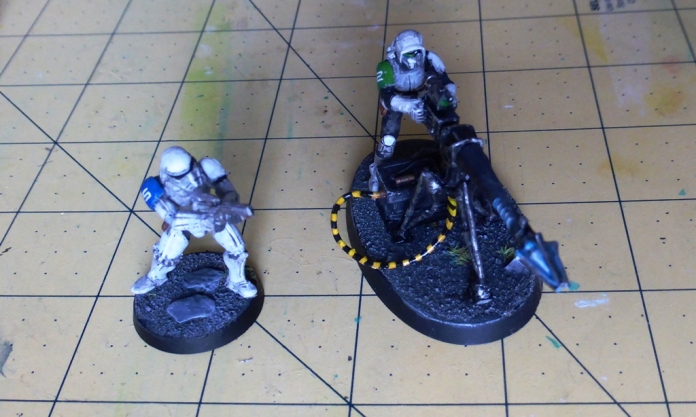 The result: A beefier, much more intimidating gun. Fire at will! 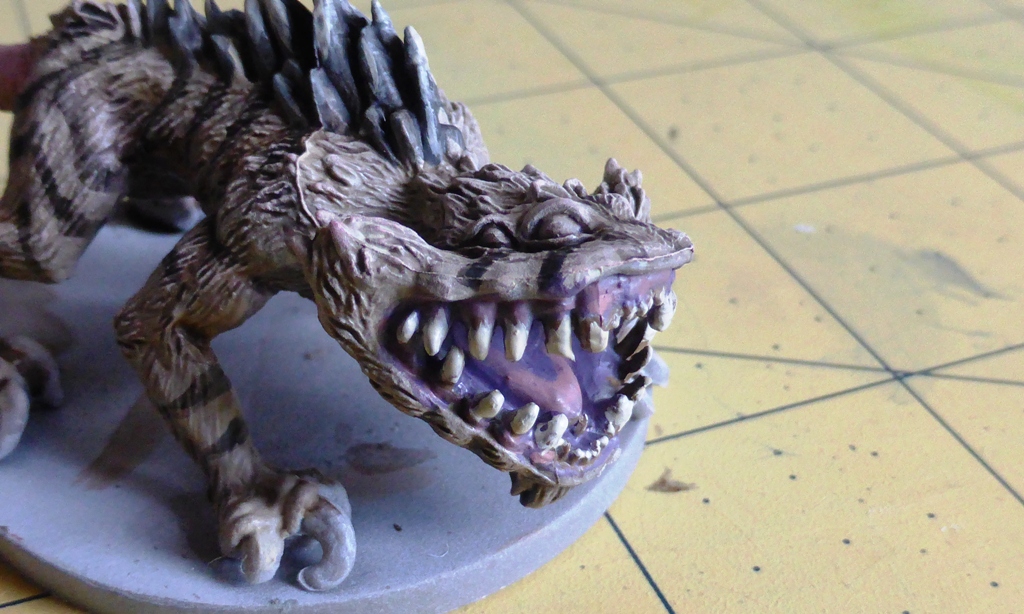 I managed to do a bit more painting for Imperial Assault, specifically the Nexu, which is such an awesome little model.

I certainly didn’t remember the Nexu from the movies (It is in the arena in Attack of the Clones, but I suppose I remember little from that movie at all). However, painting the miniature, I must say, it really is a wonderfully model and full of character.

Like many people painting Imperial Assault, I am mostly following the fantastic guides from Sorastro. Have a look there for an in-depth Nexu painting guide. 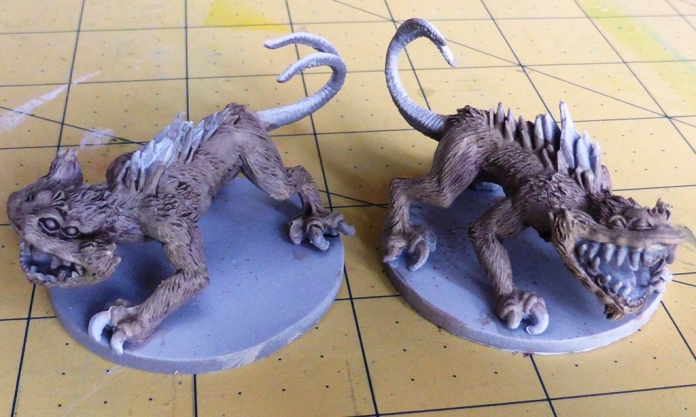 For the fur, I used Rakarth Flesh for a base coat, followed by Screaming Skull for the top parts and a wash of Agrax Earthshade and Nuln Oil.

After the wash was dry, I applied a light dry brush with Screaming Skull. 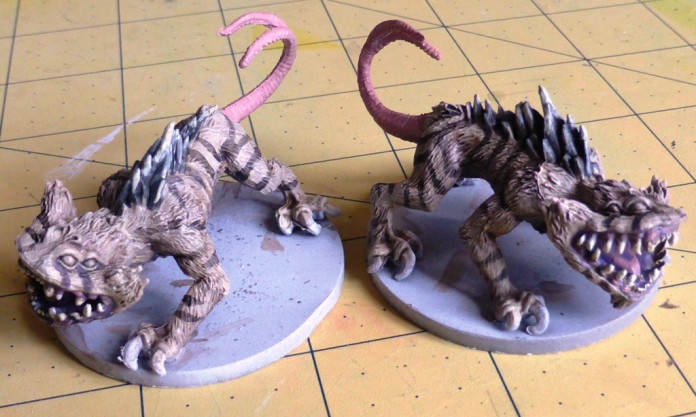 One of the coolest ideas from Sorastro’s video are the stripes painted on with washes.

Unfortunately, I found them a bit tricky to do. Some look really awesome, but some stripes came out a bit blotchy 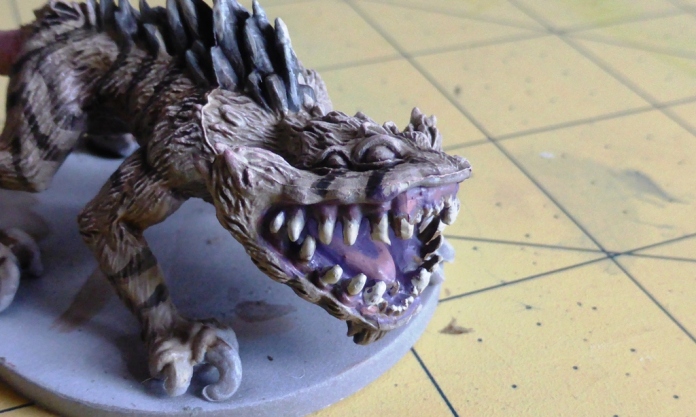 I also used a base of Daemonette Hide, along with Druchii Violet as a wash and Bugman’s Glow, sometimes mixed with Army Painter Matt White for highlights.

I ended up really liking the mix of purple and flesh-tones.

It wasn’t an intuitive colour-combination for me, but I think it could also be used for other exotic miniatures to good effect.

The Nexu so far … 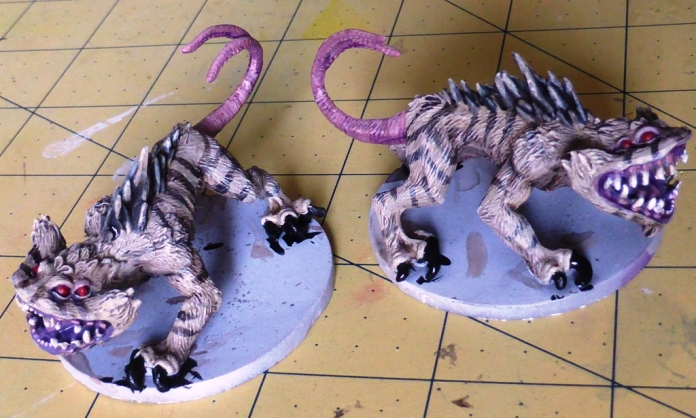 Not quite finished yet, but with Mephiston Red eyes (again Druchii Violet to shade), black claws and a few other details, my Nexus are coming along nicely …